Realistically, nothing bad ever happens in the woods, right?
Put all your guards down, and enjoy your time with a friendly stranger, who might have had developed a thing for you!

CONTENT WARNING: This game demo includes themes of sexual and violent content, this game is intended for an 18+ audience!

DISCLAIMER: As of now, we have tried to update and fix the web browser version of the game. Renpy web is very unstable and may not work for all systems. If you would like to play the game, we recommend you download it instead for the fastest and most stable experience.

Haven't played yet.. I've seen letsplays of it but it says there's a ''common issue'' with the game please fix this if you do i will be so very greatful -randomsimp :)

I love this game sm! I have a question tho.. is the game finished or will it still get updated? Also my  6 year old-self would be so in love w alan he reminds me a bit of my fav creepypasta from 2016 tbh. :)

i love this game!! (Alan is my favorite name, and it is funny, cuz i wanted gave that name to MC but choose original name, not knowing why haha) also, i feel strange joy from the fact Alan is lactose intolerant (i am too!!) sorry for silly comment and bad grammar, i'm just overjoyed. game is great, that's all <3

Would someone be able to help me? When I attempt to download the game the download freezes when it reaches 108MB. I've tried restarting my computer to fix it but that hasn't worked. If anyone has any ideas or solutions it would be much appreciated!! :)

Someone pls help me, i just can't download the day 2. I really wanna know what happens before day 1, please help!!

lovin this game! it's very interesting so far and looking forward to more of it!

This was a fun little game! Spooky but with cute art!

I NEED MORE of this, please il give my soul for it aaaAAAAH

Honestly, this gives me "Your boyfriend Game" vibes, and I'm so here for it! Alan is so cute and just lovely, I'm only sad I couldn't cuddle and love on him while he was telling us about his background. Gonna be watching for more, can't wait!

Why does the style of the Hatchet man remind me of YB?

I actually played YB before. Only day 1, tho.

I only watched the gameplay haha but yeah that’s cool

Alan is so charming!

anyways when do you kinda expect the full game to be released?

and a small critique story wise, the other characters were introduced in a very flat way, i couldnt really get a grasp of their overall importance, this might come up later in the game idk.also i think that mc is way to accepting of Alans shenanigance it would be neat to have the choice to push back a little to get a grasp of his character but again, this might turn out to be in the full release

*Alan thinks you are boring* the end ( :

aww... this is so cute, definitely waiting for more <3

I CANT WAIT FOR THE FULL VERSION TO COME OUT I NEED TO KNOW WHO "HE" IS GFDJQ;KSDFJSHGKJLV,MNFKSL

yep, this is the best game ive played on itch.io

the ROB WASTE DIARY OF THE SEASON SURROUNDING THIS GAME AND THINGS RELATING TO IT.

so, i kinda speedran the intro of this game, which i regret doing since games like these need to get soaked in a lil. so i'm going to start the game again later. yeah.

I kept waiting for something bad to happen but that was so wholesome! Really fun game, Alan is very charming and I'm curious to see how the story develops further.

how do you play the other days???

they aren't out yet D:

Alan is a sweetheart and I really enjoyed playing the game, expecting for more chapters!

I'm not able to play the game due to an error, but the game still looks super cool!!! I hope everyone else enjoys it :D

please help i cant play the game because of errors im on chrome how do i fix this issue?

play it on fire fox it helped me X

Alan is soo damm cute,im soooo damn in love with him *I SIMP TOO MUCH*

I swear I just created an account just to leave compliments on your work, thanks for sharing your talent with us, do you plan to release a full version? If so I would be very happy to follow 🥰

i am now deeply in love with alan, thanks!

I L O V E D ur game A lot and i am exciting for the full version, good luck<3

Your game was great! I'm so sorry that em was rude :<

OMG, you are really nice Bean!! And don't mind em bc some people doesn't know the art you make so cheer up there are a lot of people who like your game including me of course<3

I have the worst computer on EARTH and I played the WEB version, it worked.
I don't know why some people can't play it, but there's no need to be rude.

dude can you even make something close to this :/ nope, I don't think so you are probably so bored with your life to say something like that. And btw the game works fine for me so maybe your potato pc is shit, and btw it is not about being rude it is about you not being able to fix a simple error or try to relaunch it I think you even downloaded it from the wrong link. Get your life together and do something useful instead of wasting it here writing some crap you probably planned for hours. You could've just asked for help instead literally it won't coast you anything.

you wrote a whole essay dedicated to "owning" this random commenter who simply said that there was a bug preventing the game from running. calm down dude

tbh that's a you problem that you can't play it XD it's possible lol but like if that's the case just download it? there's nothing that's going to benefit you from acting like that here lol

its not their faults if you cant play, its your own problem dipshit

dont be a bitch. how about you make a game you lazy fuck

dont be a bitch. how about you make a game you lazy fuck

the game may be broken... it also says something about apple??? which it shouldnt unless this game was made for apple devices and i doubt apple would allow people to use dating sims on their game especially 18+ dating sims because of how strict they are with their rules (even rules they make up on the spot to make it super hard to make a game. like the fortnite issue? they made that rule up on the spot which is why some games didnt get taken down for breaking that rule, its because there wasnt a rule being broken)

i think its broken... because nothing is happening...

edit: had to reset the page to get it to work... game should not do that

second edit: nvm it was just playing music but it was def not working... 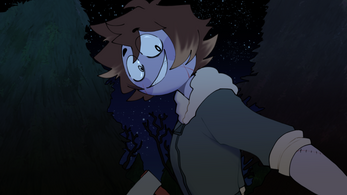